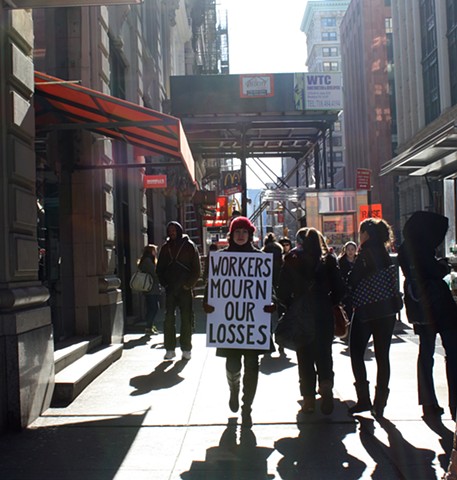 The performance commemorated the 1909-1910 New York Shirt Waist Strike and the 1911 Triangle Factory Fire. I walked a route between four historically important sites associated with these major events in labor history: the former Triangle Shirtwaist Factory building at 23–29 Washington Place (now part of New York University); the former national headquarters of the International Ladies Garment Workers Union at 11 Waverly Place; Cooper Union Auditorium where workers and the Union voted to strike in 1909; and the site of a reception and fundraiser in support of the strikers organized by the Socialist Women’s Committee in 1910, at 19-23 St Mark’s Place, formerly Arlington Hall. The placard carried in the performance is adapted from banners reading "We Mourn Our Loss", carried at a funeral march and protest organized by the Union following the Triangle Factory Fire.

For six weeks in 1909-1910, over 20,000 mostly immigrant women garment workers went on strike for better working conditions. They won the right to a 52 hour work week, a wage increase, and four paid holidays a year. The agreement was not signed by the owners of the Triangle Waist Company, and a deadly fire broke out at the factory in March 1911, killing 146 workers who were trapped inside because the factory owners kept the fire exits locked. 100 years later, garment workers around the world continue to endure unsafe and life threatening working conditions in non-unionized and unregulated factories, for very low wages.