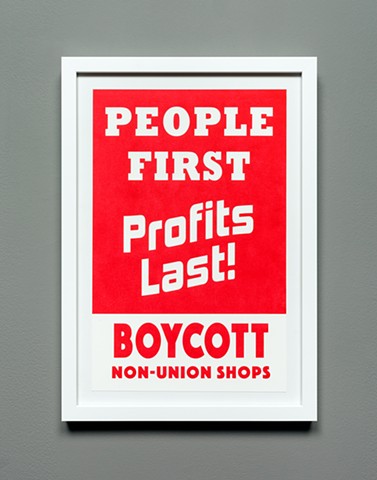 This print was recreated based on an archival photo in the International Ladies Garment Workers Union archives, of a placard used in a 1978 rally in New York City demanding that J.P. Stevens and Co recognize the 1974 unionization vote by workers at its seven textile plants in Roanoke Rapids, NC. In the 1960s and 70s, the International Ladies Garment Workers Union, the Textile Workers Union of America, and the Amalgamated Clothing Workers joined a broad, interracial coalition of civil rights groups, religious leaders, and politicians to wage a unionization campaign by workers at J.P. Stevens and Co., then the second-largest textile manufacturing corporation in the country. The company refused to recognize the union until 1980. In 1988, J.P. Stevens and Co. was sold to a trio of major textile competitors, who soon moved operations their overseas to take advantage of even lower labor costs.